Picking the right Canon can be an expensive proposition. With prices that can easily breach the mark, you want to make sure you’re choosing the best Canon camera for your needs and lifestyle. After all, as neat as the doodads on a camera are, you might not ever use them all. If you’re an amateur photographer who only needs to snap some cute shots of your kids at their recital or your partner on an exotic trip, you’ll find yourself wondering if that money couldn’t have been better spent elsewhere — on a vacation where clouds of mosquitoes don't storm you, for example. At the same time, if you’re a professional photographer or you desire to be one, the cheap less camera might not be able to do everything you need it to.

Canon, Nikon, and Sony are the three most prominent names in the camera game. It’s honestly hard to go wrong with a selection from any of these brands, and each comes with its respective strengths and weaknesses when compared to others.

However, each brand is relatively equal when it comes to photo quality. Professional photographers may be able to point out slight differences when it comes to shooting in extreme settings, such as in true low-light situations or when needing a long exposure shot.

Canon’s most significant difference, when compared to either Nikon or Sony, is found when shooting video. As Canon employs a Dual Pixel CMOS AF system for video, its cameras can utilize two light sensors per pixel when Nikon and Sony typically only use one. This means its auto-focus is sharper and brighter than competitors.

So, getting back to the question, this list is Canon-exclusive because it’s pretty easy to build a top ten list of solely Canon products. Additionally, brand loyalty is often the final check mark when it comes to picking a camera.

What Are the Different Types of Cameras?

The most basic type of shutter-box is often referred to as a point-and-shoot camera: most people own this type. Products in this category tend to be smaller, cheaper, and they automate most settings for ease of use. Technically, a point-and-shoot is also mirrorless, which only really matters when compared to the other primary type of camera, the DSLR.

DSLR stands for digital single-lens reflex. Without wading too far into the technical weeds, DSLRs allow users to see an image through the optical viewfinder that’s very close to the actual photo. This accuracy is due to its use of a mirror that alternates between sending light to the viewer — the part that you see through — and the image sensor — the part that captures the photograph.  While the images are stored digitally, they are similar in form and quality to the work of the professional film photographers of yesteryear.

The cheapest Canon on this list will set you back. However, while this list focuses on both the best and the best value, there are great Canon cameras out there that could cost you up a cheaper price, such as the Canon EOS 54 Mark IV. While that is a tremendous high-end camera, it’s price places it out of reach for most amateur photographers.

The full price range comes with a wide range of features, too. Photo quality, however, is not necessarily one of them. The best DSLR camera on this list will shoot photos at 24 MP, while the cheapest will still shoot at 20 MP. Even regarding video definition, the best point-and-shoot has the same 1080P capability as our best-reviewed DSLR.

Instead of quantifiable hardware stats, the difference will probably be most obvious in soft specifications, such as ease of use. DSLRs come with swiveling touchscreen displays, making it easy to shoot at excessively high or low angles, while the point-and-shoot models do not.

To remove bias and to ensure a high level of accuracy when describing these cameras, we compiled information and reviews from leading experts, as well as individual reports from retailers, such as Amazon and Walmart.

By taking this route to discern the best camera for each type of need, we can remove bias, stick to the facts, and provide recommendations that include all aspects of a camera’s use — from determining the best photo quality to measuring each entries ease of use.

​The Canon EOS 80D is the best Canon camera available. Its body is protected from the elements, including rain and dirt, due to its weather sealing. It’s capable of shooting high-quality photos and videos and has a longer battery life than less expensive models. With a flip-up touchscreen that pulls out and can flip either up or down, you’ll be able to shoot this high-quality footage at either extremely high or low angles.

Due to the aforementioned Dual Pixel CMOS AF, the EOS 80D keeps the focus on moving objects in both photo and video mode. This means you’ll be getting camcorder-level quality from this camera while shooting at 1080P definition.

Another great feature is the Camera Connect app, which you can download to your phone. This allows you to set up your device wherever you’d like and control it through your mobile device. The app will also enable secure transfer of photos from the camera’s storage to your phone, making sharing on social media impressively easy.

With a retro design and ​lower price point, the Powershot G9 X Mark II is at the forefront of Canon’s point-and-shoot Powershot line. It’s small and lightweight, capable of fitting snugly into a pants pocket or tossed and carried in a backpack.

This camera, despite its size, is capable of shooting big photos at 20 MP quality or high-def videos with 1080P resolution. If you’re looking to make continuous captures, sometimes known as burst shooting, you’ll be able to snap photos at 8.2 frames per second: a better rate than even the best DSLR cameras on this list.

Its touchscreen display allows for ease-of-use when operating, especially when you take advantage of its customizable settings menus. Every adjustment you need is right where you want it. When it comes to photo customization, you'll be impressed by the Mark II’s ability to save and edit RAW-format files without needing to transfer photos to your phone or computer. This allows you to edit the image right on the camera, adjusting things such as white balance or picture style quickly and easily.

This camera also comes with standard Wi-Fi and NFC connectivity and adds Bluetooth syncing for good measure. Regardless of how you want to get photos from your camera to your phone, you’ll be able to manage it with the Mark II. 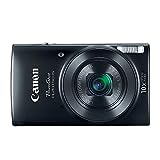 ​The PowerShot ELPH 190 is perfect for the photographer who needs a primary camera with no fancy frills, even if they want to use it every day. Despite being the smallest and lightest option on this list, this PowerShot model packs in a lot of punch with 20 MP photo quality and 10x optical zoom. This is a great choice to toss in a travel bag or backpack and forget about until you need it.

Available in multiple colors — black, blue, and red — this point-and-shoot is capable of shooting video in 720P. You won’t want to film an entire movie on it — but if that’s your goal, you probably are looking at more expensive cameras already. However, its Smart AUTO feature will keep all of your pictures and videos looking great by analyzing your shot and environment and choosing the best settings based on many built-in presets. Professional photographers who fret over each setting may find that annoying, but, again, for the most basic photo taker, it’s a smart feature — no pun intended.

Built-in Wi-Fi and NFC allow you to connect your phone without much hassle, so you can transfer photos to share or upload to the cloud. Using the Camera Connect app, again, allows for remote control of your camera through your phone, vastly increasing the number of angles you can reach for the perfect shot.

When it comes to the best Canon camera, your individual skill and comfort level matter a great deal. If you’re looking to get professional level shots or embark on your career as a photographer or videographer, your best option is the Canon EOS 80D. While it is by no means cheap, it’s also not the most expensive option on our list. It provides excellent value, advanced technology, and will most likely be in your life for many years.

For $300 less, the EOS Rebel T7i offers similar functionality at a much more palatable price point. If you’re a beginner to the world of DSLRs, it’s a solid entry point. If you’re concerned about its lacking battery life compared to the EOS 80D, charge up a spare battery and keep it in your camera bag.

For point-and-shooters, the best option is the Canon PowerShot G9 X Mark II. It’s slightly more than $400, but is tiny, lightweight, and packs in features that compare favorably to its DSLR counterparts. If you prefer syncing through Bluetooth, as opposed to Wi-Fi or NFC, it’s by far the best option on this list.

When it comes to those who want an inexpensive option that doesn’t feel cheap, the Canon PowerShot ELPH 190 is less ​price and comes with smart features, again, pardon the pun, such as Smart AUTO, which determines the best camera settings for the environment you’re shooting in. Its 20 MP photo quality is the same as the Mark II, but it can only shoot video in 720P resolution. You’re most likely not buying this camera for video shooting, though, so that most likely will not be an issue.

Honestly, it’s hard to go wrong with any Canon camera, even those not included in this list. There’s a reason that Canon is generally recognized as one of the best brands of digital photography, and it would have been incredibly easy for this list to run a dozen deep. However, these four are the best of the lot and should leave you the most satisfied.